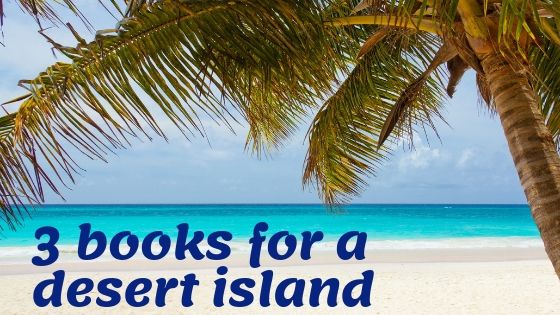 Desert Island Discs – that long British running institution – allows guests to select one book to accompany them on said desert island, in addition to the Complete Works of Shakespeare and the Bible (or other suitable alternative). But what if you’d prefer the complete set of Harry Potter instead of Shakespeare? I know I would. I find Shakespeare wonderful when performed, but I’m not a great a fan of reading him and, as an agnostic, I’m not sure what would count as a Bible alternative. So, I’d tweak the rules to …

Given three slots to fill, would it be J K Rowling filling the first slot? And the answer to that is – I don’t know. Certainly I’ve read and re-read the entire Harry Potter series multiple times and on those few occasions when I’ve lost my love of reading, it’s re-reading this series which brings me back into the fold. In truth, the only other candidate is the thrillers of Dick Francis, which have been my comfort reads for many a decade. The first option is relatively easy in that there are two clear choices – and I’d probably be content whichever I chose – but the next two are much harder.

I studied the bible as a teenager but, as someone who became distressed by many of those who practice organized religion, I’m afraid I’d find it depressing rather than uplifting reading. Perhaps something like A Year with Rumi: Daily Readings would meet the need, for I have to admit there’s nothing in my current library I could immediately select.

One standalone book which is much loved and would stand repeated re-reading? Hmmm. Most of my 5-star reads are one-offs – once you know what’s going to happen, the magic is somewhat lost. Anything too dark wouldn’t do, as the situation calls for more of an escape than a mental or emotional challenge. I considered Pride & Prejudice for it’s fun & frivolous with a happy ending, but decided instead on To Kill A Mockingbird as its reading always brings to mind that wonderful film, and being transported away when you’re trapped on a desert island seems the way to go.

What choices would you make?

14 thoughts on “3 Books for a Desert Island”