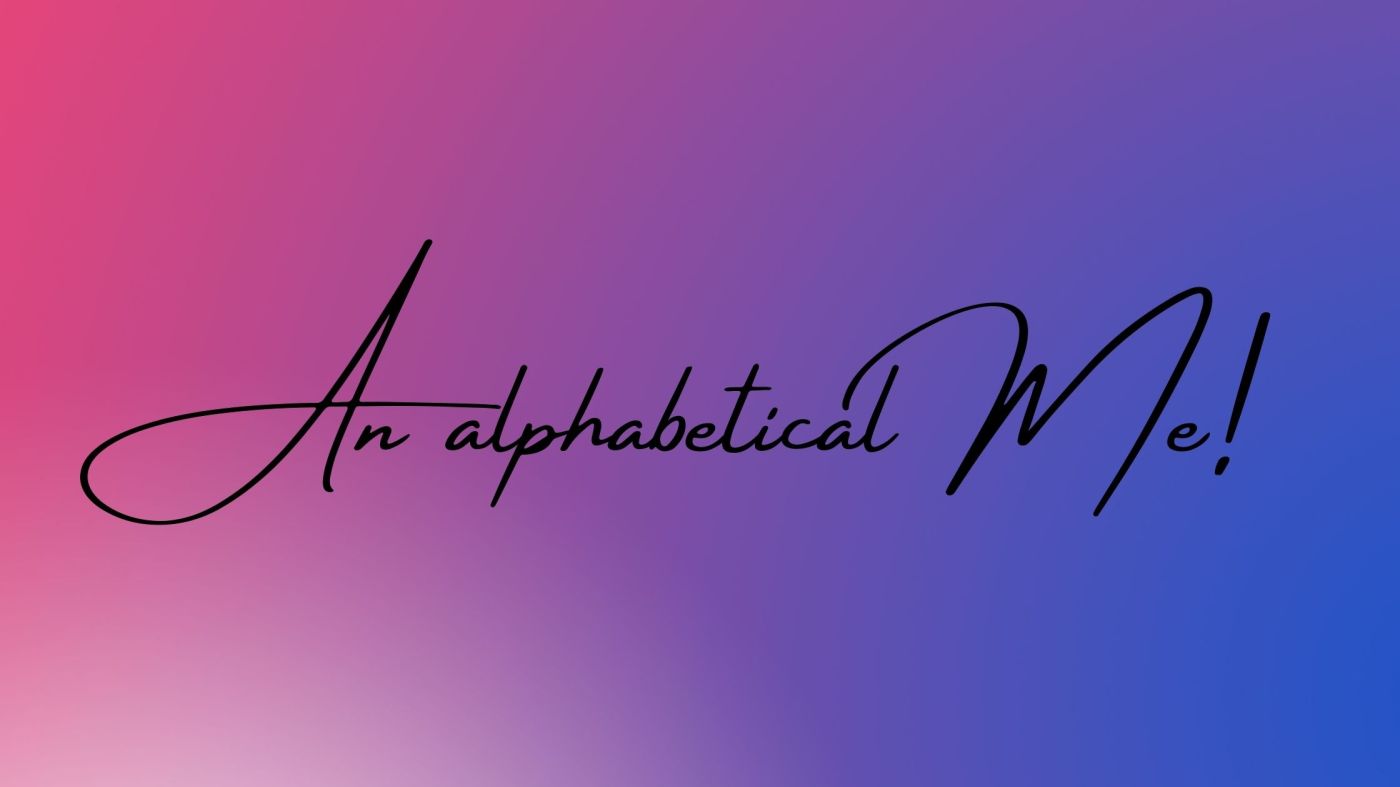 LA encouraged me to give it a go when I’d read both her’s & Tater’s A-Zs. Being a game gal, and as my mind tends to work in the A-Z structure anyway ‘cos of the A2Z blogging challenges I keep participating in, I decided to give it my best shot….

A is for Alliteration
of which I am a fan. I didn’t learn much English grammar growing up as my early schooling was interrupted by civil unrest but, once I came across the concept of alliteration, I knew I was in love 😀

B is for Boundaries
Despite having recently passed my 65th birthday, these are a relatively new thing in my life. I grew up without any, spent decades thinking anyone who had them was uptight, only to finally get why they were necessary in my fifties. I now have them, value them and defend them stoutly.

C is for Coach
of the life variety rather than the sporting. Although I initially trained in counselling, I came to realise it was important for me to work with people who were ready to make changes, so switched my focus to coaching. I love what I do, finding it enormously satisfying.

D is for Depression
I live with Depression. It spends most of its time under control, but it can rear up – seemingly out of nowhere – and bowl me over. With hindsight, I can see that I’ve suffered with it for decades, certainly from my boarding school years. Nowadays, having had lots of therapy (which I would do again in a heartbeat if needed), I take my meds, and I follow multiple lifestyle practices to help with its management. I’m not afraid of it anymore, but I know it’s unlikely to go away for good.

E is for Education
I like to learn, I like to study – whether formally or informally, in a classroom setting or self-paced – I thrive in learning environments. I didn’t previously, so it’s an aspect of my mature years that I embrace.

F is for functional Fashion
We lived overseas for all my childhood, so missed many fashions and trends. As a result, I rarely felt in step with what the cool kids were wearing. There was a brief time when I worked in advertising that I had a style of my own – which was also considered cool by the cool kids. After a recent wardrobe overhaul, I have a small(ish) number of clothes which I know suit me and fit me properly, so I can forget about them once they’re on.

G is for Grandmother
My daughter has two children – one of each – simply gorgeous individuals, in both looks & personality. I’m too creaky to take an active part in their high energy lives, but I love to spend time with them whenever possible.

H is for Himself
An intensely private man, he both makes me laugh and feel loved. Clever, hard working, no-nonsense and completely honest, he keeps me on the straight & narrow. He also re-kindled my love for photography.

I is for Indian
(and a little bit of Irish and a tiny bit of Iranian) My mother’s father was Parsi and held an Indian passport, but as all Parsis originated in Iran before they emigrated to India, I’m claiming a bit of that early origin too 🙂 His wife was Anglo-Irish so, although my surname is Irish, I only have an eighth of Irish blood from her line of which I’m certain. I’m also a bit Scottish via my father’s mother, and yet more English via my father’s father – the one with the Irish surname 😉 I was an Indian national from the time of my birth there and until I reached the age of 10, when my parents got around to registering myself & my sister for British citizenship.

J is for Jung
He and Freud (both Anna & Sigmund), John Bowlby, Fritz Perls, Eric Berne and many others – all number among those in the field of psychology from whom I’ve learned much already, and who I will doubtless keep learning from till I die.

K is for Kindness
something we could all do more of – and I include myself in that. Social media is covered in memes exhorting us to Be Kind! More consistency in action than in posting those memes could result in us having a better world in which to live. I openly admit to being judgemental and sarcastic by nature but, even when telling a harsh truth, I seek a way to make it easier to hear, and constructive rather than destructive. In short, I don’t always succeed, but I won’t stop trying.

L is for Lagom
I love the concept of Lagom – which in Swedish means “just the right amount” or “not too much, not too little”. It’s generally taken to mean “in moderation” or “a sufficiency” or “enough”. As a recovering perfectionist, good enough is something I strive for. Additionally, in a world where I have more stuff than I will ever need, I am learning to emotionally disconnect from it. I had a major breakthrough recently when I passed on a long loved item of furniture in favour of my sister, even though it was earmarked for me. And I don’t regret it one little bit. I’ve still a way to go, but I feel so much lighter already.

M is for Mother
The most important thing I’ve ever done or ever will do. Watching my daughter grow up into the wonderful woman and mother she is, cannot be matched by any other part of my life.

N is for NLP
or Neuro-Linguistic Programming to give it its full name, came into my life relatively recently. Having always regarded it as having something of the whiff of snake oil about it, I was pleasantly surprised to discover otherwise. I’ve since undergone professional training, and now use it as a primary tool in my life coaching.

O is for Observation
For a talker, I’m a damn good listener. But more than that, over the years, I’ve realised that I seem to know stuff that other people don’t, even though we’ve shared the same experiences. It took me a while to work out that I notice things, and I file them away. All the stuff I observe, gets put together with what I’m shown and told, and a picture emerges – an accurate one generally. I enjoy people watching, for I find us humans endlessly fascinating.

P is for Photography (and Pentax)
When my daughter was born, I started taking pictures seriously, learning both how to fully use a camera and about composition. But she grew up and, with the advent of smart phones with cameras, I’d all but given up cameras when I met Himself. He persuaded me to try photography once more, and I’m now rarely seen without my Pentax camera. They’re less expensive than the better known models, but are rightly famed for the high quality of their glass. And I like being a little bit different to the crowd 😉

Q is for Quins
who are my rugby team. In the past, I’ve held a season ticket and also attended away games. These days, I’m a fan from a distance, but still love them and their style of play. I’m regularly rebuked by fellow fans for putting my club team ahead of the national side. It bothers me not one little bit 🙂

R is for Reading
I still work full-time, write fiction and blogs, take photographs, and do all the other stuff of life. But I read – a lot. Not as much as I used to, but I manage an average of a book a week. I cannot imagine a life without reading.

S is for the Seaside
I’m a child of the tropics, where the seaside meant sandy beaches, so it was with a degree of horror that I first encountered shingle beaches in the UK. It’s taken a while (decades in truth) but now I love them. I still adore the feeling of sand between my bare toes, but just smelling the sea air – even with the whiff of fish – gives me a sense of peace I don’t get anywhere else. I would love to live on the coast, somewhere I can walk along the seafront – shingle and all – to enjoy the waves and the sound of the gulls. The UK seaside is my happy place.

T is for Tanks
of which I know WAY more than I’ve ever wanted 🙂 Himself is an avid military historian, so I’ve learned – because as long as a person is knowledgeable and passionate about a subject, I’ll always find it interesting to listen.

U is for Understanding
in both senses of the word. I’m understanding (and accepting) of people’s quirks, individualities, opinions and foibles. But I also always seek to understand. Sadly, it’s not possible to understand the behaviour and motives of all sections of society – but I’ll continue to try.

V is for Vegetarian food
As someone who spent their childhood in India, vegetarian food was commonplace – indeed, in a country where beef is offensive to Hindus and pork to Muslims, vegetarian food is a safe middle ground. I am not a vegetarian myself, but enjoy and eat it a lot. I agree with my father’s oft stated view that, if I were to go entirely vegetarian, Indian food would form the bulk of my diet.

W is for Whiskey
I drink very little these days – my hard drinking rugby supporting days being behind me 😉 I enjoy an occasional cold beer, glass of red wine, some fizz (pink especially), a G&T, and I can even give a cocktail menu a thorough run out, but my particular favourite is Irish Whiskey. As a heathen from the tropics, I like to drink it over ice, but it doesn’t stay in the glass long enough to get particularly watered down 😀

X is for Xmas
Honestly, I can’t say I really like this abbreviation, but it does fulfil one tricky letter of the alphabet 😉 I’m less of a Christmas nut that I used to be, but I still have a lot of decorations and tend to go to town. All indoors rather than outdoors – any clambering with my bad balance and back would be asking for trouble 😉

Y is for Yourself
Yes, it’s another bit of a cheat as it’s really myself when I’m the one speaking, but I’m stealing the Oscar Wilde quote for this: “Be yourself, everyone else is taken.” Women, in particular, feel under pressure to behave in certain ways, even if that means they will not be their authentic self. I was told certain behaviours weren’t feminine when growing up – anger for one – and it dogged me for life, because I tried to bury it rather than learn how to express it in a calm and rational manner.

Z is for Zebra
When I was in school, Marc Bolan of T Rex sang “oh Debora, always look like a Zebra”. As it went on to say “your sunken face is like a galleon, clawed with the mysteries of the Spanish Main” you may not be surprised to learn that I did not like this song 😉 For my proper name is Debra, and although I’ve been called Debbie, Debs & Deb at different times & places during my life, Debra had a bad start with this song. I’m growing to like the name better the older I get – Marc Bolan be damned 😀

Any quirky or arcane facts about yourself you’d care to share?