When I go to an art exhibition, I go with an open mind. I hope to leave having seen at least one piece of work that I really liked. Not liked as in wanting to have it on my wall, but in having found it very pleasing to the eye. Primarily, I go to learn. To see work up-close and personal, to examine brush strokes, to figure out technique. I’m not an artist so there’s no intent to learn how to do, rather to build my knowledge base as an appreciator.

First up was a visit to London to view a selection of photographs from the collection of Sir Elton John at the Tate Modern. Sir Elton calls pre-digital photography “the first major art form of the 20th century” referring to photgraphers like Man Ray as Marco Polo or Christopher Columbus with a camera, true artists and adventures with a camera going where no photographers had ever been before. ‘The Radical Eye’ was made up of 150 pieces of work from this passionately build-up collection. My personal highlights at the exhibition itself were a half-dozen corner portraits by the american photographer Irving Penn – simply superb …

… as were the depression era photographs of Dorothea Lange.

Applying my art gallery principle, I also came away with ideas on cropping, framing and composition, to apply in my own work.

Next up was the Royal Academy’s ‘America after the Fall: Paintings in the 1930s’. Not an array of seasonal work as I’d erroneously assumed, here the Fall refers to the Wall Street Crash, rather than the american term for Autumn.

Familiar artists such as Jackson Pollock, Georgia O’Keefe and Edward Hopper (who’s painting ‘Gas’ appears below) were represented, but there was much more on offer.

There were works showing the race struggle, many strong, bright and boldly graphic paintings, as well as dystopian pieces inspired by the mass fear of facism and communism felt at the time. But the major story depicted is the impact of The Dust Bowl during the Great Depression, which caused mass migration and lead to the urbanization and industrialization of the country.

The prize on display was ‘American Gothic’ by Grant Wood (see image below), a painting making it’s first trip outside of the Americas. 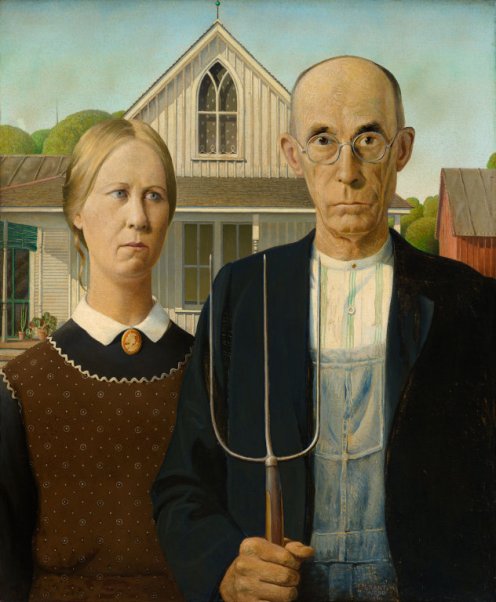 The image is familiar, a rural scene, it is somewhat folk-artsy in style, naive, simple and painted in muted shades. But in the flesh, this has a depth and emotion not seen in reproductions. Previously flat, it now has depth. What could been seen as mocking, is now clearly affectionate. Truly beautiful and entirely worthy of it’s place as an iconic piece of art.

Both exhibitions had their highlights, both taught me much. But at 150 pieces there was a tad too much padding at the Tate Modern’s show whilst, at 50 pieces, the exhibition at the Royal Academy was at that baby bear level of appreciation … just right!

What did you think of these two fine exhibitions? What exhibitions have I missed? What are you looking forward to seeing?