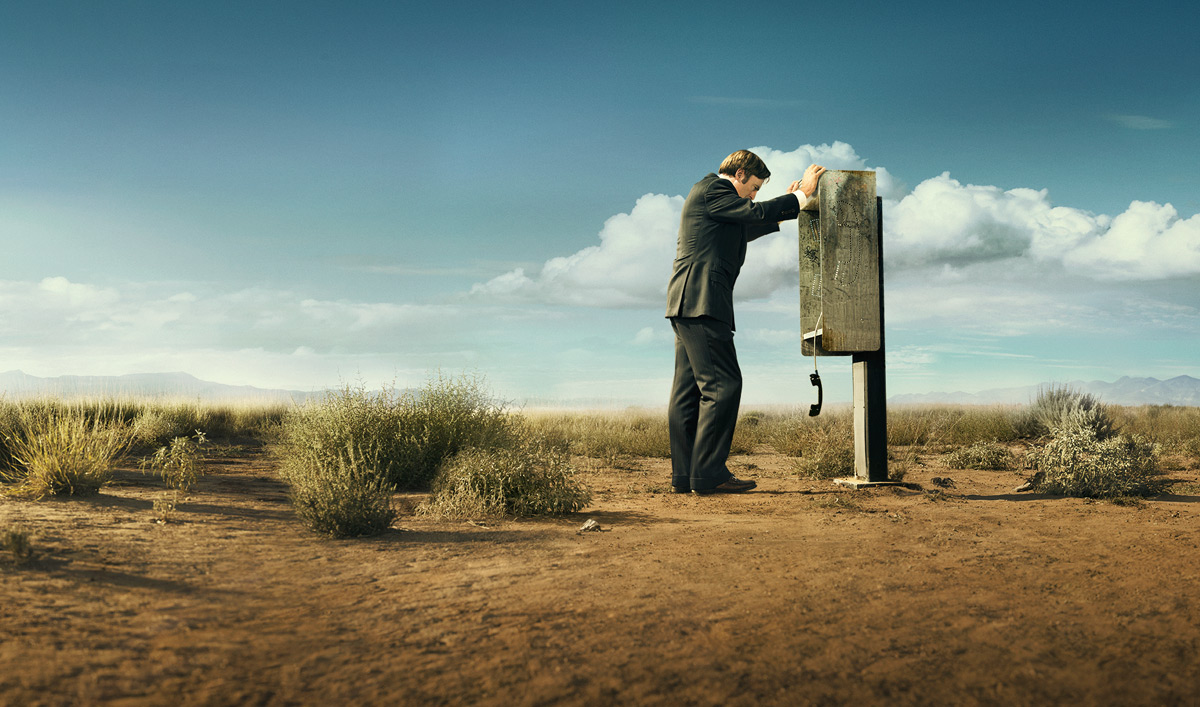 Yes, I heard all the broohaha about “Breaking Bad”, but I tend not to watch much TV and when I do, it’s usually in a binge-fest. If Himself had suggested we binge-watch “Breaking Bad”, I might have agreed, despite it not appearing on my hypothethical ‘to watch’ list. But the first episode would’ve put me off … of that I have no doubt.

Luckily, then, that he brought me “Better Call Saul” first. This is one of those currently popular spin-off variations – a prequel – and is still currently airing, unlike most of my binge-watching. It has taken the hugely sleezy character of lawyer, Saul Goodman, from “Breaking Bad” and is giving us the how-he-got-there story. For Saul Goodman was once a nice guy … ish.

Jimmy’s the younger son of a nice couple who run the local store, where he’s watched his father being taken advantage of by every con-man and loser in town. He’s told “decide which side you’re going to be on – those who get taken advantage of, or those who do the taking” before he goes on to become ‘slipping Jimmy’, living by slick dealings and famed for his ‘falling down’ cons. His big brother, Chuck, becomes a seriously big-time lawyer who bails Jimmy out at the threat of jail time. Insisting he straightens out, Chuck gets Jimmy a job in his firm’s mail room. There Jimmy meets Kim, whose legal training is being funded by the practice, and she inspires Jimmy to study and qualify – via distance learning – as a lawyer. But Chuck is secretly horrified, believing that Jimmy has taken a short cut – “the University of Samoa for chrissake” – and not given the law it’s proper respect. Hiding behind another partner in the firm, Jimmy is refused an entry level position.

And slowly, ever so slowly, we watch as Jimmy moves from a man who (whatever his brother believes) respects the letter and spirit of the law whilst – effectively – ambulance chasing, via one who uses every quasi-legal short cut in the books, to becoming infamous as a truly ‘criminal’ lawyer. I’ve watched two seasons to date, so that transition isn’t – yet – fully complete, but it’s been a fascinating process.

It mimics the slide from law-abiding husband and father – Walt – in “Breaking Bad”. A man who decides to ‘cook’ crystal meth in order to provide for his family’s future when diagnosed with lung cancer. In this case, the descent from being the local school’s hard working chemistry teacher working a second job, to becoming a major player in the drug business and a killer to boot, happens at a remarkable speed. And everyone is shocked by the transformation when the story finally gets out. Walt? That straight, dull guy? For Walt is a natural. He takes to the whole drug business like a duck to water, all the while insisting that he’s ‘doing it for his family’. He eventually admits that he loves it, revelling in the power.

I disliked his character from the get go. Himself felt I was being overly hard on him … till later. The way Vince Gilligan showed Jimmy McGill morphing into Saul Goodman demonstrated that – if you watch carefully – there’s always evidence of the good people being not so good. At least there is in TV-world. And that all it takes is the right (or wrong) circumstances to bring those character traits to the fore. Fascinating stuff …