Even in a period when my reading time is having to be strictly rationed (I’m doing an accelerated training course), I simply have to read. I know you’ll understand that my fellow readers …

Now I’m normally a lover of big chunky books (I may have written about that before) but, under the circumstances, I’ve actively been seeking some short, easy reads. And it’s proven a surprisingly fertile source of good reads. 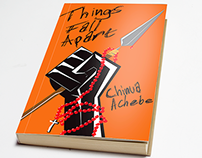 First off was Things Fall Apart – Chinua Achebe the African classic. At only 208 pages, it finally made it off my TBR pile. For some reason, I’d not previously checked the length of this famous book and had assumed it was bound to be a weighty tome. Instead, it turned out to be small and truly b.e.a.u.t.i.f.u.l.l.y formed. And this is a first book <sigh> but back to my review as a reader, rather than my envy as a writer.

Our central character is Okonkwo – a very masculine man, a champion wrestler, a winning warrior, successful and highly regarded in his village. But Okonkwo’s bravura is built upon fear, fear of becoming like his loser father. So he works hard, keeps busy and he requires that his wives and children do likewise. He’s not an easy man, filled with pride, judgemental of those he considers weaker or less successful.

Whilst the message to take from this book is the impact of British imperialism, the majority of the book is actually spent in depicting village life in rural Nigeria, of Igbo culture and language. Achebe writes with a subtle touch, delicately linking Okonkwo’s killing of Ikemefuma (an outsider who’s also his eldest son’s much loved friend and someone who looks up to him as a father-figure) with his later – and accidental – killing of a clansman. This light touch enables us to view his banishment for the latter incident as somehow karmic. During Okonkow’s banishment, the British arrive, spearheaded by missionaries. And that is when – for Okonkwo, for his beloved village, for old-style Nigeria – things fall apart.

Next we come to This Is Going to Hurt: Secret Diaries of a Junior Doctor – Adam Kay which was, at 285 pages, another quick read. What makes this an unusual pick is that it wasn’t on my radar … at all.

In fact, I decided to read it solely as the result of a clip from the book which had been posted on Twitter. Yes, seriously, I did. This may have been a Sunday Times bestseller (and a hardback one to boot), but it was the clip that did it.

And it didn’t let me down. The dry humour displayed in that one clip was present throughout the book. Simply put, this is the story of Adam Kay’s time as a junior doctor in the NHS, drawn from thoughts noted down in his journal during those years. Although thee laugh out loud moments are genuinely funny – it’s no wonder this man has found a second career as a comedic writer – what really makes this book a standout is the underlying serious message. But there’s no preaching, the serious stuff is handled deftly and with a light touch. Oh … and there’s also the entirely understandable desire to do serious harm to the Health Secretary – one Jeremy Hunt – and his governmental cronies. Read it, do!

Lastly, there’s Dark Matter: a ghost story – Michelle Paver. This was the longest at 255 pages and I have to admit that I don’t usually read ghost stories, for I get too easily scared. Yup, I freely admit it. I was the kid who found Hammer Horrors positively terrifying. So I truly cannot work out how this got onto my kindle. I suspect I didn’t notice the sub-title and genuinely confused it with some kind of science fiction tale. More fool me eh?

But, on reading the blurb, it mentioned the Artic and, as I’m unlikely ever to go on an expedition to the Artic, I decided I was relatively safe in reading this one. That is, till I was reading it one night when already a tad drowsy (I’m surely not the only one who always reads a bit before sleeping) and ended up wide awake from the sheer creepiness of it.

This was creepiness across all the senses – a frightening image which came and went, the rattling, clanking, metallic sounds, and the positively visceral emotional stuff <shudder>  And yet I had to continue, I had to find out what happens to Jack. I’ll say no more. An unexpected winner this one.

And I’ve still got the new Marian Keyes to come, how lucky am I …?

Got any quick and easy winners I can tuck away for when the need arises? ‘Cos it may swing and it may sway, but I laugh in the face of a tumbling TBR pile!