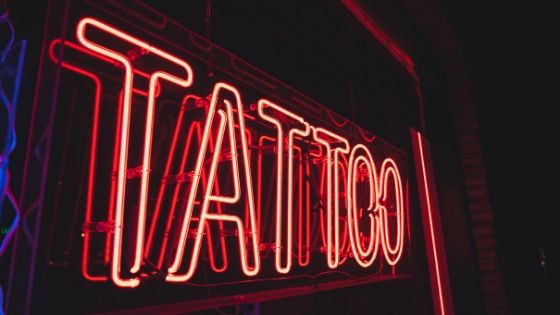 Whenever I see this on a questionnaire, I answer in the affirmative: two. But they’re not real tattoos, by which I mean they’re boringly practical and not decorative in any way. I did consider turning at least one of them into something more decorative, but never had the courage to sit through the expected pain.

A lot of women who’ve had breast cancer go on to have tattoos – some have nipples tattooed onto their implants, some have elaborate designs instead of having implants, yet others choose to have a tattoo somewhere else on the body to mark the end of treatment, or the first time they are told there’s “No Evidence of Disease” (a term many cancer patients prefer to “all clear”), to mark the end of any follow-up drug regimes, or simply to mark having been in the club.

When I had the courage to face the expected pain, I couldn’t decide what I wanted. In all honesty, the fact that I still cannot imagine what I’d like to have right there in my cleavage, makes it clear to me that I don’t truly want anything more than my green dot.

I’ve seen both extraordinary works of art, and some pretty rubbish examples. A friend has a wonderful one on her shoulder (a Maori sun) and wears strappy dresses for the many formal rugby-related occasions she attends to showcase it, and a cool and funky grandmother I met some years ago had a feather tattooed on her foot, curling up her big toe. It would only be visible during the summer or when she was barefoot – an idea which really appealed to me. It was also beautifully delicate, subtly coloured, and resembled a Liberty paisley pattern. Honestly, I was sorely tempted – till she told me the bone being so near to the surface had made it quite painful – when I’m afraid I chickened out (again) 😀

So, it’ll be just those two green dots for me …

8 thoughts on “Do you have a Tattoo?”